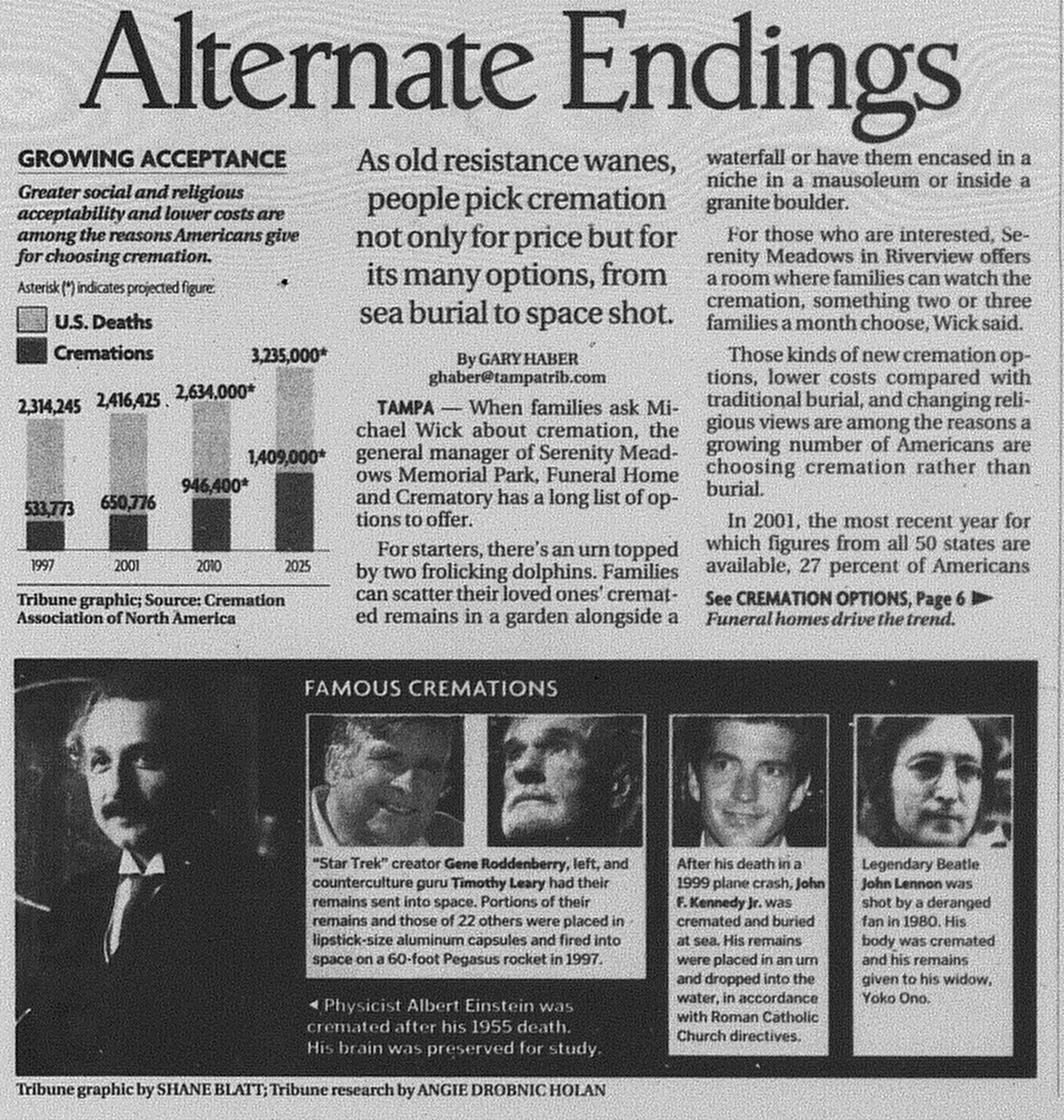 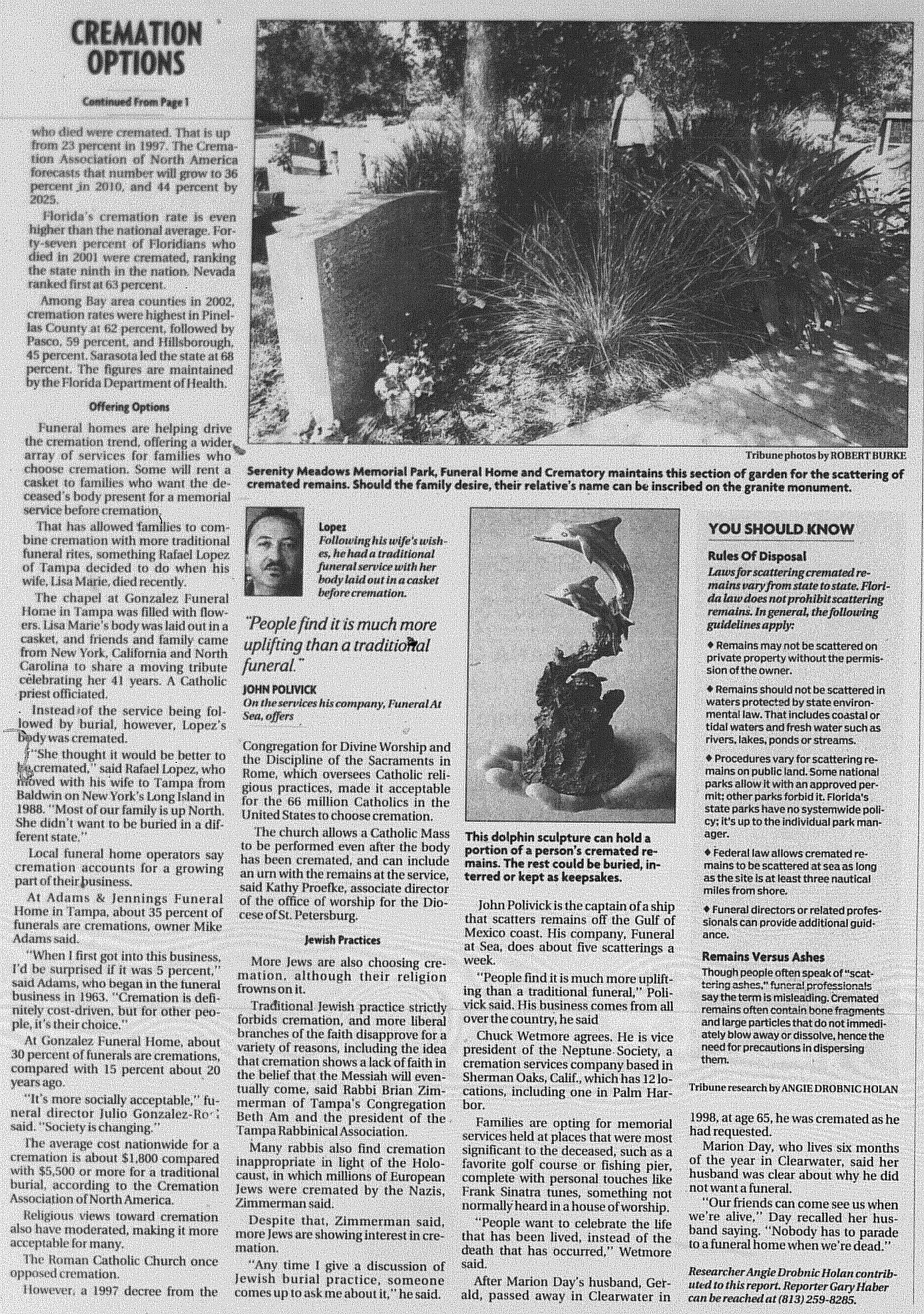 The following is the text only:

TAMPA — When families ask Michael Wick about cremation, the general manager of Serenity Meadows Memorial Park, Funeral Home and Crematory has a long list of options to offer.

For starters, there’s an urn topped by two frolicking dolphins. Families can scatter their loved ones’ cremated remains in a garden alongside a waterfall or have them encased in a niche in a mausoleum or inside a granite boulder.

For those who are interested, Serenity Meadows in Riverview offers a room where families can watch the cremation, something two or three families a month choose, Wick said.
Those kinds of new cremation options, lower costs compared with traditional burial, and changing religious views are among the reasons a growing number of Americans are choosing cremation rather than burial.

In 2001, the most recent year for which figures from all 50 states are available, 27 percent of Americans who died were cremated. That is up from 23 percent in 1997. The Cremation Association of North America forecasts that number will grow to 36 percent in 2010, and 44 percent by 2025.

Florida’s cremation rate is even higher than the national average. Forty-seven percent of Floridians who died in 2001 were cremated, ranking the state ninth in the nation. Nevada ranked first at 63 percent.

Among Bay area counties in 2002, cremation rates were highest in Pinellas County at 62 percent, followed by Pasco, 59 percent, and Hillsborough, 45 percent. Sarasota led the state at 68 percent. The figures are maintained by the Florida Department of Health.

Funeral homes are helping drive the cremation trend, offering a wider array of services for families who choose cremation. Some will rent a casket to families who want the deceased’s body present for a memorial service before cremation.
That has allowed families to combine cremation with more traditional funeral rites, something Rafael Lopez of Tampa decided to do when his wife, Lisa Marie, died recently.

The chapel at Gonzalez Funeral Home in Tampa was filled with flowers. Lisa Marie’s body was laid out in a casket, and friends and family came from New York, California and North Carolina to share a moving tribute celebrating her 41 years. A Catholic priest officiated.
Instead of the service being followed by burial, however, Lopez’s body was cremated.
“She thought it would be better to be cremated,” said Rafael Lopez, who moved with his wife to Tampa from Baldwin on New York’s Long Island in 1988. “Most of our family is up North. She didn’t want to be buried in a different state.”

“When I first got into this business, I’d be surprised if it was 5 percent,” said Adams, who began in the funeral business in 1963. “Cremation is definitely cost-driven, but for other people, it’s their choice.”

The average cost nationwide for a cremation is about $1,800 compared with $5,500 or more for a traditional burial, according to the Cremation Association of North America.
Religious views toward cremation also have moderated, making it more acceptable for many.

The Roman Catholic Church once opposed cremation. However, a 1997 decree from the Congregation for Divine Worship and the Discipline of the Sacraments in Rome, which oversees Catholic religious practices, made it acceptable for the 66 million Catholics in the United States to choose cremation.

The church allows a Catholic Mass to be performed even after the body has been cremated, and can include an urn with the remains at the service, said Kathy Proefke, associate director of the office of worship for the Diocese of St. Petersburg.

More Jews are also choosing cremation, although their religion frowns on it.
Traditional Jewish practice strictly forbids cremation, and more liberal branches of the faith disapprove for a variety of reasons, including the idea that cremation shows a lack of faith in the belief that the Messiah will eventually come, said Rabbi Brian Zimmerman of Tampa’s Congregation Beth Am and the president of the Tampa Rabbinical Association.

Many rabbis also find cremation inappropriate in light of the Holocaust, in which millions of European Jews were cremated by the Nazis, Zimmerman said. Despite that, Zimmerman said, more Jews are showing interest in cremation. “Any time I give a discussion of Jewish burial practice, someone comes up to ask me about it,” he said.

John Polivick is the captain of a ship that scatters remains off the Gulf of Mexico coast. His company, Funeral at Sea, does about five scatterings a week.

“People find it is much more uplifting than a traditional funeral,” Polivick said. His business comes from all over the country, he said

Chuck Wetmore agrees. He is vice president of the Neptune Society, a cremation services company based in Sherman Oaks, Calif., which has 12 locations, including one in Palm Harbor.

Families are opting for memorial services held at places that were most significant to the deceased, such as a favorite golf course or fishing pier, complete with personal touches like Frank Sinatra tunes, something not normally heard in a house of worship.

“People want to celebrate the life that has been lived, instead of the death that has occurred,” Wetmore said. After Marion Day’s husband, Gerald, passed away in Clearwater in 1998, at age 65, he was cremated as he had requested.

Marion Day, who lives six months of the year in Clearwater, said her husband was clear about why he did not want a funeral. “Our friends can come see us when we’re alive,” Day recalled her husband saying. “Nobody has to parade to a funeral home when we’re dead.”

FAMOUS CREMATIONS
* Physicist Albert Einstein was cremated after his 1955 death. His brain was preserved for study.
* Star Trek creator Gene Roddenberry and counterculture guru Timothy Leary had their remains sent into space. Portions of their remains and those of 22 others were placed in lipstick-size aluminum capsules and fired into space on a 60-foot Pegasus rocket in 1997.
* After his death in a 1999 plane crash, John F. Kennedy Jr. was cremated and buried at sea. His remains were placed in an urn that was dropped into the water, in accordance with Roman Catholic Church directives that forbid the scattering of remains.
* Legendary Beatle John Lennon was shot by a deranged fan in 1980. His body was cremated and his remains given to his widow, Yoko Ono.

Three Easy Steps
1.pick a day and time
2.fill out authorization form
3.send it to us

CLERGY
We have clergy available if you wish to have one aboard when we scatter the ashes of your loved one.

Video of Our Sinking Urn

History of Cremation Funeral rites and customs are a distinctive human characteristic. They have important psychological, sociological, and symbolic functions for the survivors.  Therefore, funeral rites and customs deal not only with the preparation and disposal of the body, but also with the well-being of the survivors, and with the memory of the deceased and their spirits...Read more

OUR FAVORITE PRAYER
Do not stand at my grave and weep.  I am not there; I do not sleep. I am a thousand winds that blow, I am the diamond that glints on the snow.  I am the sunlight on the ripened grain. I am the gentle autumn rain. When you wake in the morning hush, I am the swift,uplifting rush, of quiet birds in circled flight. I am the soft star that shines at night. Do not stand at my grave and cry, I am not there, I did not die. -Anonymous